In ALL Things, Remember This 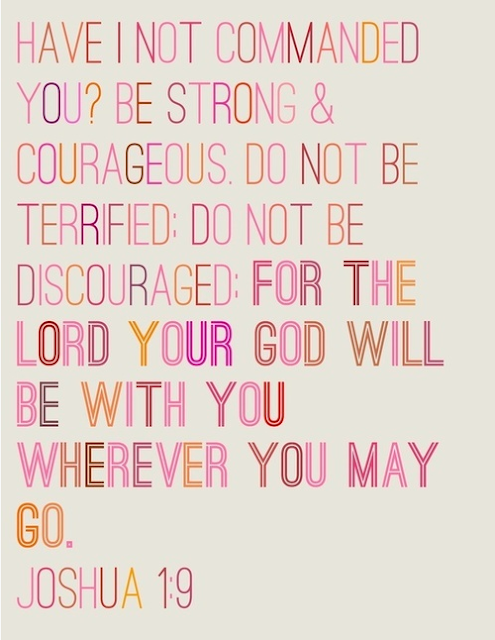 If you memorize one scripture this year, or if you're on a scripture memory journey, this would be an amazing one to have in your heart and your head.  I found it on the last blog (October 2013) of a gal who was losing her battle with cancer.  On Thursday she fell into the arms of Jesus.  While I didn't know her, she blesses me with remembering He is always there, no matter what.  Thank you Michelle.  I pray comfort for your family.

Encourage One Another, continuing the journey on fresh paths.
Blessings and love to you, xoxo.
Happy Trails
Posted by Robinanne at 7:49 AM No comments:

Huh? Life From the Porch is Always an Adventure.

It's a cool, overcast, somewhat gloomy day as I sit inside my house and watch outside.   Sparrows continuously are flying onto the porch and then getting inside the abandoned swallows nest in the corner of the porch.  They get in it, flit around and then they fly out and their friend, who was watching from just a foot over, flies in.  They are singing and carrying on.  What in the world are they thinking?  They are flying in and out from under the porch.  I think they are adding to the nest.  They are bringing stuff in and tucking it into the mud nest.  There are three of them out there now, flitting about and checking it out.  What in the world are they doing?  Then two fly off and one sits, happy as a clam (how happy is a clam anyway?), chirping away.  Then he will move some stuff around, like he's tucking and shifting something.  What's going on out there?  I NEED my camera, but as I'm sitting int he chair, Ikey is tucked away under a throw on my lap, sacked out, so I can't get up.  Should I Google "do Sparrows upcycle Swallow's nests"?
OK, well after a long Google search, I didn't find any clear evidence that the English Sparrow will reside in a barn Swallow's nest.  I did find out however, that Swallows will upcycle their nests and reuse them every year.  I'm not sure if it is the same pair or a different pair, but I hope the ones that come this year are more successful than the sad state of affairs that occurred last year, when 5 were born and they all disappeared after a day or two.  Anyway, it was in the mid teens here temperature wise just a few days ago, so nesting and raising babies of any kind would be a bit, well, premature I believe.
Guess I'll just have to watch and see.
Well, as I close, one Sparrow is still there, sitting and chirping.  You know what it looks like...looks like he's out there watching me in here?  Big Brother!
Huh?  Life from the porch is always an adventure.

Encourage One Another, continuing the journey on fresh paths.
Blessings and love to you, xoxo, happy trails.

Posted by Robinanne at 8:33 AM No comments:

60th Birthday
There are several of my friends who are turning 60 this year.  The first one, Janet, has a birthday on January 7th.  Yesterday Janet's daughter had a surprise breakfast gathering for her in her honor.  As it turned out, it was not a surprise.  A few weeks ago Janet began expressing to her daughter NOT to plan ANYTHING for her birthday.  She said it over and over and with such enthusiasm that her daughter began to feel she would be "in trouble" if she did.  So A admitted the event to her mother.  I don't think A had to tell Janet all the details, like who was attending, but enough to settle things down and get the ok for the event from her mother.
When A arrived with her mom and and Janet's only grand daughter, Janet had a huge smile on her face.  She was thrilled, it appeared to me, at the gathering of all the friends who had turned out to celebrate her birthday.
To my surprise, I knew all but two of them and I had heard of them but had not met them previously. 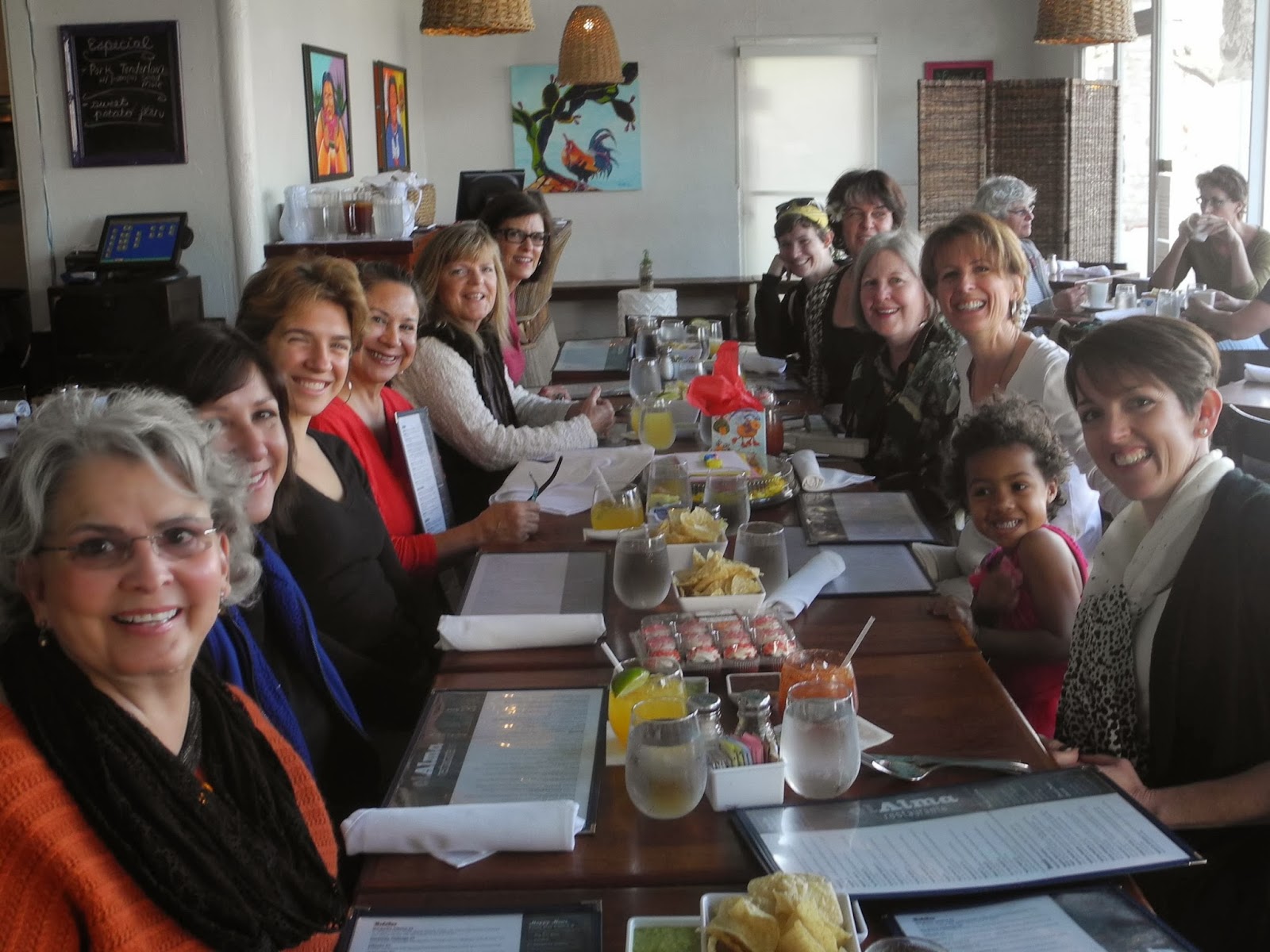 The 60th Birthday Gathering
Some of the rest of us had been on trips together with Janet.  There was no one there who knew Janet less than 10 years (except her son in law and grand daughter).  The rest of her friends attending were admittedly "old" friends.  These were friends she had met through reading and books, music, work-design, and some she'd met through other friends.  I believe, of the friends there, I had known her the longest (although she has friends she had known longer than I, they were just not able to attend).  I've know her 32 years.  I met Janet when her daughter, A, was 3 years old.  A is now 35 WITH a 3 year old of her own. Isn't life something.  We worked together in one of our first interior design jobs after we had both graduated from college.  We were fast friends.
Through marriages, divorces, marriage and divorce again, we held each other up.  Through births and deaths we have been there.  Through agreeing and disagreeing; through thick and thin, through hell and high water, we are still friends.  Thirty two years requires a lot of growth and a lot of change.  It has not always been easy.  I believe however, God puts people in your life for a reason.  Thirty something years ago, in a job we both disliked, God saw fit to put us there together.  I'm so glad.  What a blessing she has been to me!  She has made a difference in my outcome and I thank God for her.
While I ended up in social work, Janet has gone on to be a fabulous interior designer who has changed the lives of other people through her ability to see something from nothing and to create something awesome out of someone's dream.  She has incredible vision and amazing talent.  She does such an amazing job, her clients become her friends.  They also come back and use her skills again later!  Both those things say a lot.  She is generous with her knowledge and her resources.
To one of my best and "oldest" friends, Happy 60th birthday...may you have many more and may the best be yet to come!  xoxo 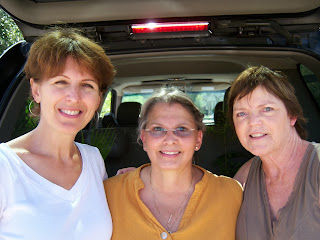 Janet, Paula, Me.  This is three of us, October 2007.  We've been around the block together!  That's me with seriously short hair and no make up and about 20 pounds heavier.  My friends don't seem to have changed a bit.  Check out these photos from yesterday... 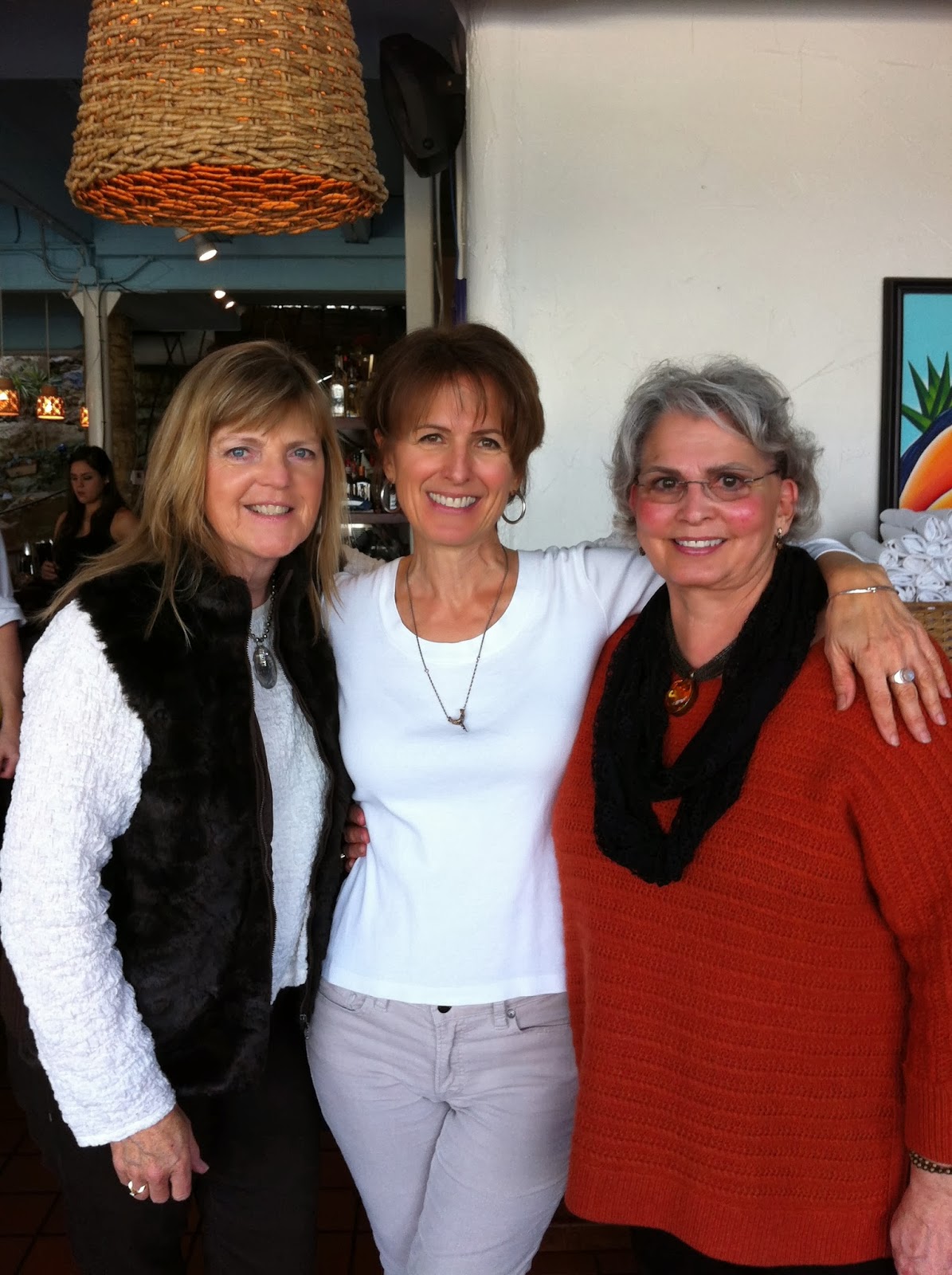 New International Version (NIV)
9 Two are better than one,
because they have a good return for their labor:
10 If either of them falls down,
one can help the other up.
But pity anyone who falls
and has no one to help them up.
I pray God moves us all "forward" into the next steps of our lives, together!

Encourage One Another, continuing the journey on fresh paths.
Blessings and love to you, xoxo, happy trails!
Posted by Robinanne at 5:42 PM 1 comment:

Leave NO Dream Behind

This is an amazing video.  The words and the encouragement are strong.  You don't have to relate it to some physical or athletic desire, but to any desire, any plan or hope or dream that you have or want to do or accomplish.  It's about working hard, working through the trials, suffering through some pain, working through what many others may never get through, with perseverance.  It's about going the extra mile, the long way around, the road less traveled.  It's about never letting go of a dream.  Check it out...

2 Consider it pure joy, my brothers and sisters,[a] whenever you face trials of many kinds,3 because you know that the testing of your faith produces perseverance. 4 Let perseverance finish its work so that you may be mature and complete, not lacking anything. 5 If any of you lacks wisdom, you should ask God, who gives generously to all without finding fault, and it will be given to you. 6 But when you ask, you must believe and not doubt, because the one who doubts is like a wave of the sea, blown and tossed by the wind.

Romans 5:3-5
New International Version (NIV)
3 Not only so, but we[a] also glory in our sufferings, because we know that suffering produces perseverance; 4 perseverance, character; and character, hope. 5 And hope does not put us to shame, because God’s love has been poured out into our hearts through the Holy Spirit, who has been given to us.

Encourage One Another, continuing the journey on fresh paths.
Blessings and love to you, oxox, happy trails.
Posted by Robinanne at 12:41 PM No comments:

forward: Adj
: near or belonging to the front part of something; moving or directed ahead or tward the front; moving toward the future or toward a more advanced state or condition 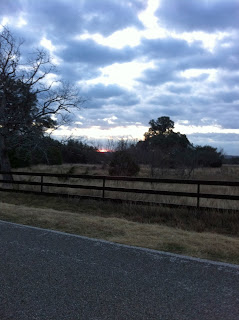 New International Version (NIV)
12 Not that I have already obtained all this, or have already arrived at my goal, but I press on to take hold of that for which Christ Jesus took hold of me. 13 Brothers and sisters, I do not consider myself yet to have taken hold of it. But one thing I do: Forgetting what is behind and straining toward what is ahead, 14 I press on toward the goal to win the prizefor which God has called me heavenward in Christ Jesus.

The wait is worth it!

New International Version (NIV)
6 In all this you greatly rejoice, though now for a little while you may have had to suffer grief in all kinds of trials. 7 These have come so that the proven genuineness of your faith—of greater worth than gold, which perishes even though refined by fire—may result in praise, glory and honor when Jesus Christ is revealed. 8 Though you have not seen him, you love him; and even though you do not see him now, you believe in him and are filled with an inexpressible and glorious joy, 9 for you are receiving the end result of your faith, the salvation of your souls.

Encourage One Another, continuing the journey on fresh paths.
Blessings and love to you, oxox, happy trails in the new year.
Posted by Robinanne at 10:34 AM No comments: