All the Pretty Horses #1 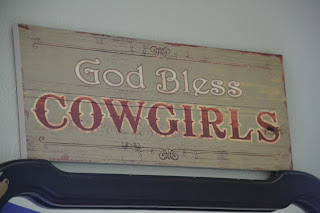 If you don't know it, I think I was born a natural cowgirl...lover of horses.  Laying in bed this morning I was thinking about what I wanted to do on my blog next.  I thought about my horse collection.  I decided to share those with you.  So for the next few blogs I'm going to show you a few of the things I love.  I collect horse figurines.  I also have a number of older prints of horses.  Some of the figurines are packed away.  A year or so ago I "staged" my condo to sell it so many of my beloved items were packed away.  Some of my horses included.  So some that I will show you are older and some I have more newly acquired.  Most I don't remember where they came from...I just love them.

The first one I want to show you is a print I purchased at an auction.  I actually had someone bid on it as I was unable to attend the auction.  It is in color on very thin paper.  The actual picture and frame are very old.  The horses are fabulous and you may have seen this print before.  THere is history to the original painting.

When I researched the painting, the following is what I found... 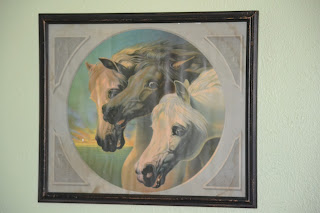 Love this print!  Love these horses!
Posted by Robinanne at 10:24 AM No comments:

Today my friend Janie and I met up in Big Spring. She knows all the small haunts there and seems as we walked in that everyone knows her as several of them spoke to her as she walked in...she's a “regular”you see. She is what I call a “swooper”, where she just swoops in, picks out a few things quickly, and is ready to go. I'm more of a browser, needing a little more time to find things, take everything in, decide whether or not to make a purchase and then move on. So far in our shopping we have not really found anything we both wanted at the same time, although I have liked much of what she purchased and she mine. After a few stores in town we headed out to a little antique store in the country. The shop owner is a bit older and truthfully I gotta say, not much of a housekeeper. There were dust and cobwebs everywhere, but we managed to find a few treasures anyway. My favorite find of the day was a Robin's egg blue rearing horse. He's about 10-12” tall. His glaze was crackled and he had a crack or two, but he was really a great color and just sharp looking. 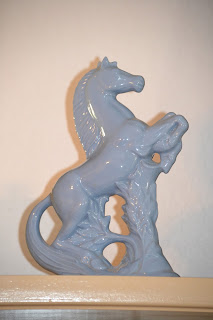 I also purchased several jewelry scatter pins and one owl necklace. The pins included two poodles (another favorite thing of mine), a tiny colt, and an artists palette. (In the attached photo the two owls on the outside I recently found and purchased on Etsy...so cute. I wore one today and it looked so perfect with my outfit. Owls, are a new favorite.) 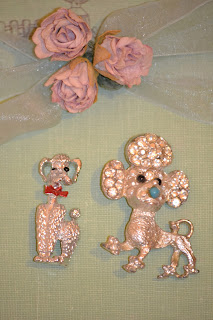 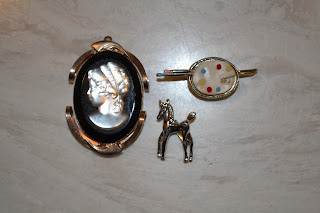 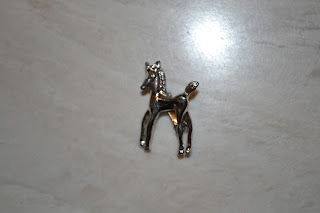 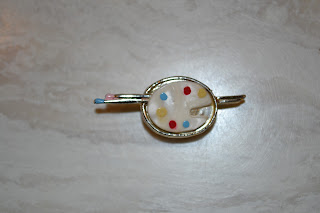 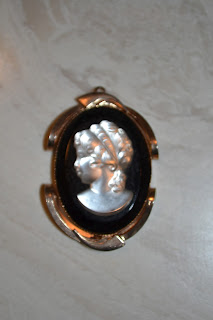 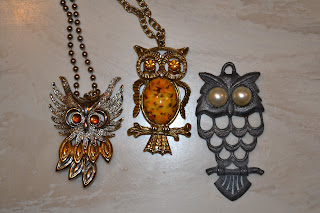 My friend made some good purchases at this antique store as well.
Then we headed off the Colorado City to meet several of the gals, better known as the Petticoats on the Prairie. There are about 8 of them; I lunched with five of them today, two of which I already knew. It was great meeting other women who love vintage and “junk” as they call it, as much as I do. They are planning a show in another town in a month or so and there was lots of chatter about that. Several of them are also planning a “picnic” at the Roundtop/Warrenton Market in late March. That will be great fun. I am planning to attend and hope to arrive early enough to be a part of the assembly line to prepare sandwiches etc., for the picnic. There's a chance I may stay there too instead of driving back home that evening, but we'll see about that. Lunch was a great ham and spinach quiche, garden salad with Balsamic vinegar dressing and homemade vegetable soup. The other girls had chicken salad sandwiches and other fresh salads. Very neat little place for very tiny little town. Anyway, after lunch the rest of the afternoon was spent taking in a couple of other antique shops in CC where I found a stoneware vase and two elephants. My friend also gave me a biscuit jar that was in her mother's shop that she just no longer wanted. 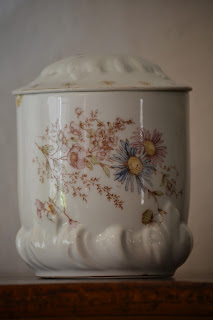 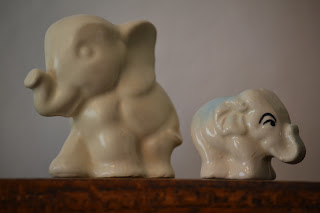 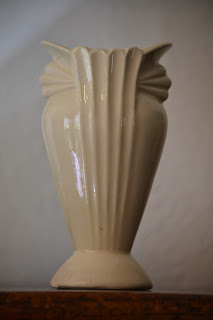 She is closing up her booth in this shop and it was something I thought was pretty. After a trip to the Sonic for drinks we headed back to the west to head home. It was a great day. Meeting her friends and seeing their shops was such a treat. All have great ideas, and are very creative women. It was fun to be a part of such a fabulous group of gals.
Posted by Robinanne at 9:50 AM No comments:

I had two dreams, two dreams on the same night...about the same man, the same man, with the same outcome.  He left me.  He left me alone, he walked out and he didn't come back.  Were these dreams of deja vu or a look into my future...or both?  Dreaming of my past or looking down my road ahead?  Don't really want to think about my past or and I sure don't want to relive it.  I guess they were more like nightmares!

Post Script:  February 27, 2012
Another dream...  on a dinner date with him at a funky restaurant hotel, he stopped by and whispered in the ears of two different women that he was "just looking at your ass".  The second one was sitting on the ground on a step.  As we were walking out he leaned down to her with a swagger and a look on his face, this disgusting (to me) kind of fake self confident smile, and whispered this to her "I was just looking at your ass".  I just walked on, walked off, was leaving.  This is not his style...not his sober style.  I don't remember much about the first one incident with the first woman, other than it was a whisper in her ear as he was behind me.  But I could tell he didn't really care if I saw him or not.  It was him, but it was the old him.  Perhaps this dream is the result of him recently mentioning the name of that woman again sitting down for a "long" lunch at the table again, or perhaps because I am dealing with an addiction issue with my young cousin of late and that type of behavior, though not one of my cousins, it just is a reminder.  I don't know what precipitated this dream this morning...I just know I had it.  In the dream I let him know that I saw and I knew and I cussed him and said something and walked off, as if I was no longer going to be with him or participate in that.  He followed and went into something about us not being able to look at any more horses...I didn't know we were looking for horses...I thought we were having dinner.  Don't know what that was about other than that is sort of of one of my dreams...having horses...so maybe it was the dreams way of saying with him horses will not be your dream...who knows.  But it's too many dreams in too short a time.  I got right up and wrote this one down...all I can remember.  Looking back at the first entry I see that I didn't mention "this woman".  Maybe I wanted to protect her I don't know but she probably has no interest in him, but she played and flirted and teased with him, including me, but I feel she does the same thing when I am not there.  He likes that...makes him feel good, feel special.  I  know him.  Women making on over him or flattering him...gets his attention quick. Except for the fact she is the x-wife of a friend, I suspect he would be after her already.

PSS:  These dreams were about the same man.
Posted by Robinanne at 11:19 AM No comments:

Email ThisBlogThis!Share to TwitterShare to FacebookShare to Pinterest
Labels: Deams;nightmares

Post the Trot Update
Well, we are still at it, albeit with a few missed days. However, I did not set out to do this daily, just each time I rode. Between the cold windy weather and allergies, the posting days have been intermittent. Over the past weekend I burned about an eighth of a cord of firewood. It was very cold and very windy with no way to ride. The pony stayed blanketed. I made his barn available to him, but he's a bit odd where the barn is concerned. He does not want to be in it. While it can rain and sleet and he could be all dry inside, he prefers to just be out in it. Even though he can see out, he just does not like to be inside or confined. On Monday however, the weather took a 180 and was sunny and in the 60s. The wind blew until about 4:30 and then quieted down. We got a good ride in for about an hour and a half.
We started 1/17 and have trotted 11 times. We increased from 2 miles to 2.3 miles and yesterday to 2.55 miles in 22.25 minutes. Me doing body pump at the Y has lessened my back stress posting, so that is good. Mosey is trotting between 9.15 minutes and 8.39 (yesterday the longest distance) minute miles. Compared to him walking about 20 minute miles this is a huge move for him.
So I'll be gone keeping the baby for a week and we'll have to start out again next Monday (along with starting Body Pump again). We've got plenty of time though. I'm retired!!
Encourage One Another
Posted by Robinanne at 8:22 PM No comments: