OK, you've got to look really hard here to see the lounging rabbit.  See the ear, the tail, laid out flat.  It was a miracle that I even spotted him. 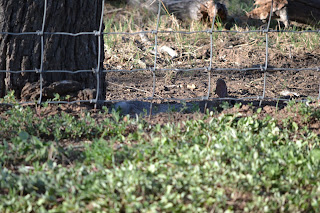 He jumped up and decided eating dinner was a better idea. 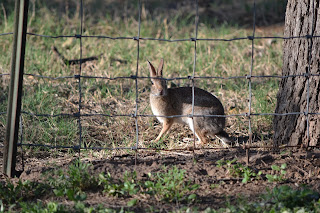 He was hanging around outside the fence where the cattle are.  I think they live out there somewhere, either in the pile of logs or a hole someplace close by.  Literally they are in the yard every day.
The other bunny was in the front yard.  She was eating the leftovers from the bird feeder.  The seeds make her happy. 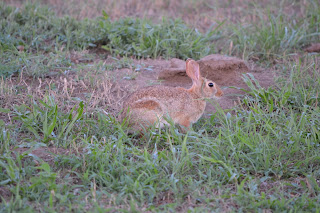 It was dinner time for everyone.  They both usually show up early in the morning and late in the evening when the heat is not so bad. 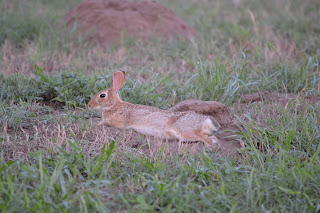 After eating she was reclining. 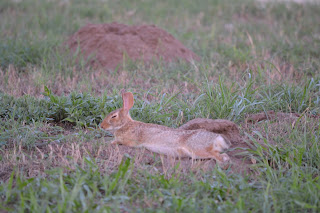 Then she was just totally relaxed.  Eyes closed, belly exposed, legs sprawled out.  I think the breeze was blowing her hair.  I love that both bunnies are so comfortable in my yard.  They know I will  not hurt them.  They know they are safe.  I've even put water bowls out for them to drink in the yard.  I have not seen them drinking out of either of them yet but I bet they do.  Only little incident that might have concerned them was when one of them was inside the garden tire when I watered with the hose.  She got a shower before she jumped out and ran off.  She's been back in the yard since, so she did not hold a grudge thankfully.
Have I mentioned lately that the animals in my country life make my world a better place!

And God said, “Let the land produce living creatures according to their kinds: the livestock, the creatures that move along the ground, and the wild animals, each according to its kind.” And it was so.


Encourage One Another, continuing the journey on fresh paths.
Blessings and love to you, xoxo.
Posted by Robinanne at 9:23 AM No comments:

Shopping at Kohl's...a Blessing, Who Knew?

Here is my Kohl's story.
I was shopping there just last week.  I had a few things to return.  Well, who can go in Kohl's and not shop around so my sissy and I started checking a few things out.  Truthfully, since I moved to south Texas I have not shopped at Kohl's!!
I saw a cute top I liked and I asked a check out clerk where others of the item I was looking at might be found.  In a somewhat raspy but very recognizable voice to me, she showed me where more of the item were hanging.  After I found what I was looking for and was ready to check out I went back to her specifically to check out.  She spoke with a very strained and difficult to speak voice.  I said "do you mind if I ask you a question about your voice?"  She said "No."  I said "do you have spastic dysphonia?"  She said no, her voice problem was due to an bad accident she was in some years ago.  I proceeded to tell her that my mother had a speech disorder called Spastic Dysphonia (a shaking of the vocal cords that make it very difficult to get sounds out and speak)  and I told her that she actually sounded almost exactly like my mother.  Talking to her was a bit emotional for me as it brought back many memories.  My mom passed away 20 years ago I told her.  "Azy" told me how she had been teased and mistreated due to her voice.  She told me it had been very hard for her to work and talk and it upset her that others were so cruel to her.  I acknowledged that, expressing that my mom had the same problem with people making fun of her and it would greatly upset my mom as well.  Azy said that her husband would take up for her (what a great guy he must be) and tell others they must treat her better.  As I was almost finished checking out, my sister walked up to the check out.  She stood there a moment and heard Azy speak.  She immediately looked over at me a bit astonished and said "did you ask her if....(she was going to say if she has spastic dysphonia).." I said "yes we were just talking about her sounding like mom.  She however, does not have DS, she had an accident years ago."  I introduced my sister to Azy.  Before the end of our conversation with Azy, we were ALL a bit tearful and Azy told us sweetly that she would pray for our mom and for us.  She gave both my sister and I a hug.  What a phenominal lady and what a total blessing that trip to Kohl's was for me and for my sister.  Best trip to Kohl's I've ever had....big shout out blessings to Azy at Kohl's in Austin, Texas! 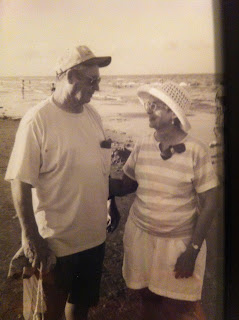 Love and miss you mom, wish you were here!


Encourage One Another, continuing the journey on fresh paths.
Blessings and love to you, xoxo.

As I was feeling sad and sorry for myself this morning, God reminded me that it's sometimes the little details that make a big difference.
I had just watered my plants and filled the birdbath.  I was standing on the porch about to go in, when a Mockingbird landed on the side of the birdbath.  He started drinking, bobbing his head up and down as he did, then he just plopped his whole body in.  He began to shimmy and shake and throw water all over and around himself.  He shimmied and shook some more as water splashed out of the birdbath.  Another bird flew into the tree above him and watched.  The Mockingbird eventually felt he was good to go and flew onto a nearby limb and continued to shake and prune until he finally flew away.  In the meantime, the little tufted gray guy flew down onto the side of the bath.  He looked in and flitted around to one side or the other, as if thinking, "this thing is too deep".  He even landed in the middle once but popped right out, I guess thinking it was too deep for him.  After hopping around the entire top, he was finally brave enough to go for it and took a drink.  When he didn't fall in, he continued that same bobbing up and down to drink until he got enough and off he went.  More birds came as I watched. 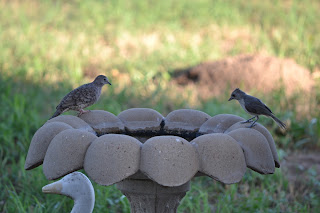 I've often wondered why the water level goes down so fast after I fill the birdbath...mystery solved.
God showed me though, that if I will slow down long enough to smell the flowers, or watch the birds bathe, that life is still good, and sweet and simple.  I talk to him a lot these days.  I reach for him.  I ask for things and I thank him for things.  He reminds me that if I'll just take one day, one hour, one moment at a time, that it could make a big difference.  The big things don't look so big then.  "Listen to me and watch for me" he says, "and keep moving forward, one simple bird bath at a time". 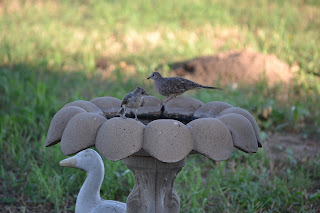 Encourage One Another, continuing the journey on fresh paths.
Blessings and love to you, xoxo.
Posted by Robinanne at 8:23 AM No comments: