NFR Post #6 The Thomas and Mack...It's All Different When You Get Inside 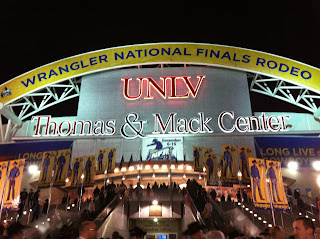 Amazing, that's what I can say about the NFR.  The excitement of the crowd just oozes out of everything.  Eyes wide open.  Oh my! 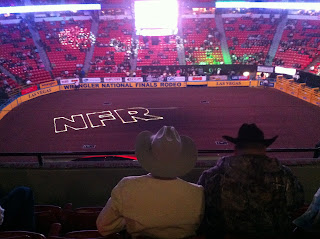 But what I want to say is when you get on the inside of the Thomas and Mack, it's all different.  When  you walk down to the floor and you look at it up close, it's small; it's so small, no, it's tiny!  The arena is tiny.  The four walls are all so close together. There is very little room to turn around.  I do not not know how they get those horses turned around in ANY event.  It's near impossible.  But the barrel racing pattern has got to be the smallest most of these BIG horses have ever run.

The Crowd:
The crowd is beyond excited.  They've been waiting for days for the first event.  They are donning their cowboy hats and boots.   It's finally here.  They are pumped!  Their hearts are racing.  They are on their feet.  A rider rides in on horseback and posts the American Flag in the center of the arena.  The crowd is quiet.  A prayer is said.  The Star Spangled Banner is sung.

The Contestants:
Huge anxiety for some; just another day at the office for others; they said so in their interviews.
The announcer calls their name.  Then, two heart rates shoot off the charts.  A prayer is said by the believers.  The horse cannot wait to get inside the arena to do his job.  He's bouncing off the walls and his front feet are off the ground.  The rider waits.  She holds him back until just the right moment.  Then she releases his reins.  The bit falls loose in his mouth.  The cowgirl spurs him on.  She lets him go.  There's an explosion.  He's off.  The horse runs in at the speed of sound; the rider kicks, whips and sometimes hollers.  Then everything slows to almost a stand still.  The crowd takes a deep breath.  The racers turn.  The crowd breaths, cheers.  Again the rider kicks, spurs, and whips, and the horse blasts off like a rocket for 3 more seconds to the second barrel, slows to an almost stand still, turns, on a dime, and then they do it all AGAIN.  Seriously!  After the last turn at the third barrel, if their run is clean and no barrels are down, the crowd goes wild, screaming, clapping, hollering, cheering the horse and rider on to victory.  Again the rider kicks and whips as they race out of the arena.  As she races down the alleyway, the cowgirl listens for her time if she ran out with all three barrels standing.  If she didn't, she's shaking her head in disbelief.  They slow.  They stop.  They take a breath.  The rider gets off.  The horse drops his head and heaves.  They are finished.  In 14 to 15 seconds it's all over...until tomorrow night.

Mark 10:27
Jesus looked at them and said, “With man this is impossible, but not with God; all things are possible with God.”

Encourage One Another, continuing the journey on fresh paths.

Posted by Robinanne at 3:10 PM