The Miracle on County Road 138 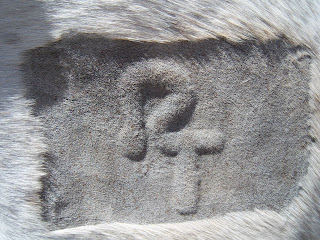 You know how much I love my horses....well, here's the story.
Forty one years ago my parents commissioned an artist to paint a portrait of the first horse I ever bought with my own money.  They gave it to me for my 18th birthday.  Truthfully, the markings were the same as my horse, but he didn't really look like my guy.  I had this painting for years, much longer actually than I had the horse.  I owned this horse, Gin, all through high school and college and into my married life.  I sold him in about 1982.  About 15 years ago I had a garage sale.  For some stupid reason I put this painting in that garage sale.  As I was closing things down that day, a lady came and bought it.  I reluctantly sold it, really having second thoughts as she walked off, but it had just been sitting in a closet.  Time went on and I sort of forgot about it.
In May of 2003, quite a number of years after that garage sale, my mother passed away.
Shortly after that I had a lady that was cleaning my house.  A particular day I had to take money by to pay her one afternoon.  She was at her mother's house.  When I walked in that house, the first thing I saw was my horse painting on the wall.  I cried.  I expressed to her that I should have never sold the painting, and that now it was even more valuable to me since I had recently lost my mother.  The elderly lady found no sympathy in that, nor did her daughter.  It was her painting and she did not want to part with it.  I was heart broken.
Today, ten years later, I ran into the housekeeper at an estate sale.  The estate sale was for a friend of mine who recently passed away.  I happened to see the signs for it on my way to church and decided to stop by on my way home.  I said hello to the housekeeper and just right off the bat asked if her mother still had my horse painting.  She told me that her mother had passed away in 2007.  She expressed that her mother had left everything to her two nephews (she got nothing).  There apparently was some estrangement in the family about that which was sad to hear.  I asked for and she gave me her sister's name and address.
As soon as I left the sale I went to the address.  A young man in his 30s answered the door.  He said his mother, Faye, was not home.  I told him my story, of how years ago a painting of my horse was sold in a garage sale and how I had found it years later in the home of his grandmother...and how badly I wanted it back due to the death of my mother (and now my father as well) and how adamant his grandmother was about keeping it.  I told him I had heard his grandmother passed away and wondered if they still had the painting.  He took my name and number and said he would give it to his mother and tell her my story.  I left there thinking, surely God would not have lead me down this path if by some miracle I was not to get this painting back.

He replied, “Because you have so little faith. Truly I tell you, if you have faith as small as a mustard seed, you can say to this mountain, ‘Move from here to there,’ and it will move. Nothing will be impossible for you.”


New International Version (NIV)
11 God did extraordinary miracles through Paul, 12 so that even handkerchiefs and aprons that had touched him were taken to the sick, and their illnesses were cured and the evil spirits left them.


Encourage One Another, continuing the journey on fresh paths.
Blessings and Love to you, xoxo.