Well, not exactly dances, but ambles, strolls, moseys, meanders with a coyote.  Saturday, one of my last two rides in west Texas, was not without an adventure.
I saddled up as usual and as I was just starting out I could see something moving along in the recently plowed field across the street where I often ride.  I decided to go that way to see if I could determine what it was.  It would walk a few feet, head down, stop, sniff, then keep on moving.  It was so slow and even paced it didn't look like a coyote.  They are lanky and bouncy in there movement.  He looked our way however, that did not change his course or his speed.  Eventually we were walking parallel with him and he began to look more like a coyote, he just didn't act like one.  He was probably 100 yards north of us.  When I stopped to try to take a few photos, he looked our way again, but just kept ambling along, in no hurry and in no fear.  This is extremely unusual for a coyote.  At one point he did crouch to the ground to watch us for a minute.  But he didn't stay that way.  He just got up and moved on. 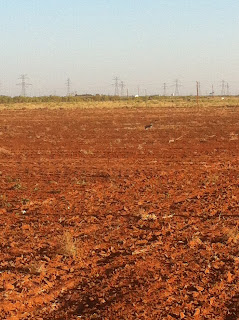 He eventually crossed in front of us, still strolling, still sniffing as he went. 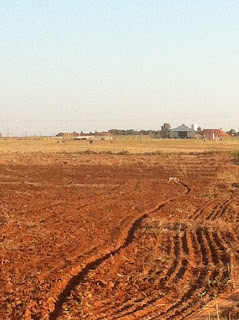 We just kept walking too.  As I got closer, he never ran.  Coyotes always run.  They never let you get close.  They are very skittish animals.  But not this one.  As we proceeded north, we crossed the path he had been on and a little bit further we turned back to the east, the same way he was traveling.  Again we were parallel.  I was able to get several more photos. 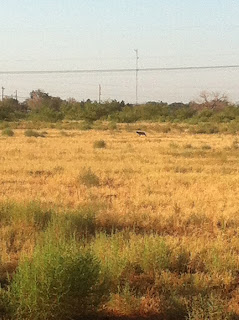 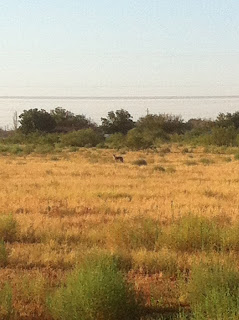 It was just the unusual calmness, the lack of fear about this guy that really had my attention.  He knew we were there.  He didn't care.  I think he could sense we meant no harm and that we too were just hanging out, cruising along at a slow rate of speed just catching a few rays and watching for cool stuff.

No, we didn't actually dance with the coyote, but we shared the trail with him...and that made for a very special next to the last ride.

Continuing the journey on fresh paths.

Posted by Robinanne at 9:37 PM