We are getting settled in, Ikey and I. We love the porch. Ikey spent numerous times yesterday and today lounging around out there with and without me. Last night we sat outside together until it got dark. The breeze was blowing just enough to make it cool. No really, mid August and the night air in south central Texas was cool. I think I could have slept out there. We were reclining in the double rocker, which I love. Oh, so nice.

This morning I woke up around 6:30am. I was watching for the sunrise that comes right in my window. Guess I dozed off as it seemed a bit overcast. As it was, I did not see the sun rise but we got up about 7. I made some tea and took that, my smoothie and a left over wheat roll out onto the porch to enjoy the morning. It was absolutely fabulous. The breeze came up shortly after we sat down. I had a hard time wanting to go back inside to unpack. As we sat there I thought about the fact that of all the time we had been outside in the last 4 days I had seen no wildlife, only birds and bugs. There are these huge grasshopper things that I just have to smash as they will destroy my plants. Ikey stalks them and finds them and I swat them with the flyswatter. There are also big yellow and black spiders that I don't kill, just mess up their webs and knock them down off the porch. I don't think they even bite, they just attach to everything.

So anyway, this morning we were sitting there all peaceful like, really enjoying our morning when I see this little flash go by toward the house. I look over the ledge. Unfortunately, the first visitor to our new home is a RAT! Yikes, eeeeekkkk!!!

Genesis 1:24
And God said, “Let the land produce living creatures according to their kinds: the livestock, the creatures that move along the ground, and the wild animals, each according to its kind.” And it was so.

He's checking things out around the porch. I stand on the porch as I swat at him with the fly swatter to no avail. I'm not planning to get too close. He runs to the other side of the porch. I swat some more and he comes back to the original side. He crawls under one of my pots. I'm thinking “you cannot stay here...no way”. I look for a stick or a broom handle or a shovel or something, but find nothing. So I go inside and get my watering can full of water. I pour water under the pot so he gets on him and he runs out again, all crazy and I water him as much as I can with him running wildly about but instead of running back where he came from he runs back under the pot. I go inside and get more water. Rats HATE water I found out. I wish I'd hat the water hose. With more watering he finally runs back out into the yard. I run in the house to get my rat shot pistol, but when I return, he has run off into the yard thank goodness. I was grateful of that as all that was in the gun was 22 bullets, no rat shot. This time he was saved. Rat shot shells are on my Walmart list. If he or any of his buddies return I will not hesitate to shoot. I will shoot any vermin that will tear up, get into things, smell bad, or bring lice, ticks and fleas in here. It's either me or them, and let me tell you, it's not going to be me.  There'll be no sissies living out here in the country; gotta cowgirl up; gotta be brave and courageous!

Deuteronomy 31:6
Be strong and courageous. Do not be afraid or terrified because of them, for the LORD your God goes with you; he will never leave you nor forsake you.”

I have spent two days unpacking boxes. So far there are 31 boxes broken down on the front porch and three huge bags of wadded up newsprint. I have no idea how many total boxes were packed, but it was a bunch. I'm still missing a few things in the kitchen so there must be at least one more box some place. I got most of the buffet and dining room done, although there may be a box missing there too. I got my TV set up so I can play DVDs on it since I still do not have Internet or Satellite TV.  I'm beginning to like days without TV but I don't think I'm tough enough to go without forever!

So tonight Ikey and I sat back on the porch. My gosh it is so peaceful and quiet. The landowner's cattle were grazing in the front pasture. My guard dog was keeping a high alert to be sure they did not come near his home. I think the stars are going to be awesome out here. 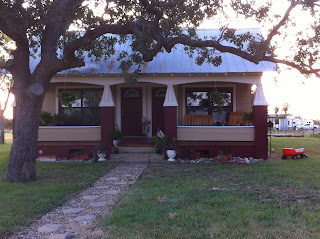 Well, there's lots to report about the move including move out day, move in day, cemetery day, and lots of photos to share. So I'll get to those as the days go by, but likely they'll be out of order. So stay tuned as we chronicle the “days of our lives”.

Encourage One Another...continuing the journey on fresh paths.

(PS) This is posted from our new WiFi hang out...McDonalds in Gonzales!  Thanks Micky D