Stream in the Desert

Sometimes, if you keep you mind open, you have no idea what you may find somewhere.  Most of what's left out in the country in west Texas is red dirt; dry blowing red dirt.  Anything green you might see in this area is in town where it can be watered or dollar bills in your wallet.  It is truly like a desert out here.  A little while back Mosey and I were just plodding along in the cotton field.  He's a plodder, a mosier, thus how he got his name.  He is generally not in a hurry to get anywhere and most likely if he were a person he would always be late.  However, he would be the least likely one to have any stress.  Anyway, the farmer had begun to irrigate his cotton.  We can see the sprinkers and occasionally even ride through them.  Well, on the way through the cotton patch we stopped at the central irrigation point, where the water comes out from the well and into the sprinklers.  There was a huge malfunction there and LOTS of water was coming out of that unit and not going out into the system.  It was creating this pool of water and a stream that was flowing out into the field…just like a running stream.  It was fabulous.  Mosey immediately tromped his feet into the mud next to the pool and lowered his head to get a cool drink.  Just like if we had been walking by a creek.  He was in heaven.  God was blessing him with a cool fresh drink of underground water.  He drank and drank. 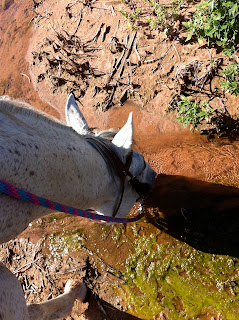 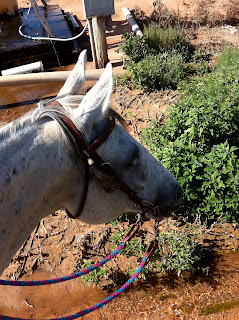 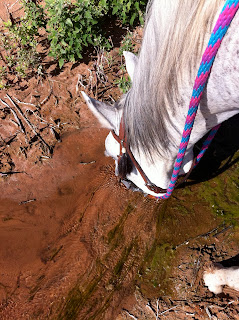 He thought it was even better than drinking out of the water hose which he loves to do.  We were surrounded by the tall green cotton plants and drinking from a running stream.  All we could see around us was the green plants, the blue sky and the running water.  Eventually he pulled his head up, stepped back out of the mud, and headed east again on down the cotton row.  But just for one moment we were somewhere else in time, in an oasis, in a beautiful place.  Just for a moment we were in a dream…and we lavished it.  So me and ole Mose, we keep our eyes open for those moments, those little pieces of time when you can be someplace else, even if only for a moment.  You never know when they might crop up.
Posted by Robinanne at 5:48 PM