Life is not about "things" I know.  I've had my lesson in that when my sister and I were told we could have nothing of our dad's from his second wife, not even any personal things.  I got a couple of flannel shirts which I cherish and that's about it.  I still like to look at them though, they just don't mean as much.  As I get older, purging "things" gets easier.  So here's my new idea.

I've been steady reading my new favorite book of design "I Brake for Yard Sales and Flea Markets, Thrift Shops, Auctions and an Occasional Dumpster"  by Lara Spencer.  I'm learning a lot and I love love love the idea of designing rooms or homes around reusing other peoples furniture, art work, etc.  In lieu of my current situation, hoping and planning to move in the very near future and not wanting to buy really one more thing, I had an idea.  Since I love "saleing" I'll go, but I'll virtual buy treasures....I'll photograph them and walk away not purchasing them and create a design with them later.  I'll start a file with these items in it and go from there.  Actually I don't even have to "end up" with the item, someone else can be buying it...I just get a photo.  So that's what I did today.  I found some great items at some great prices that had I been able to, and had a truck, I would have purchased.  I also hope to maybe have some sort of shop where I find and buy these fabulous things and then resell them.
Below are the finds of the day.  All the prices are the ones quoted with no negotiation since I did not plan to buy them. 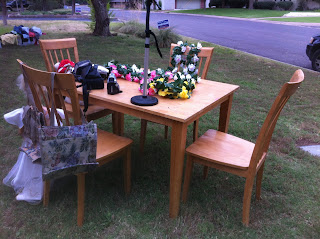 Not sure but I think the set was oak.  It was heavy and well made and the price was a steal at just $50.  It had a few marks but could most likely be cleaned up or painted. This would look great in a breakfast nook or small kitchen. I loved this set and hated leaving it behind.

The next 4 pieces were all at the same home.  Very eclectic. 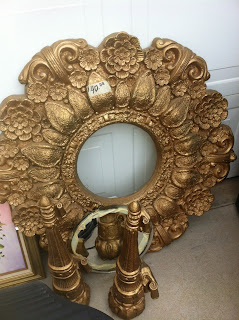 This mirror was probably made of a plaster of some sort as it was VERY heavy.  The mirror was sitting below it and these gold sconce type things went with it too.  I could see this piece above a fireplace in gold.  The gold makes it a bit more formal.  However, it could be painted, white perhaps, which would make it somewhat more casual.  it might also look great above a couple of club chairs.  I'm not sure I would mount those other pieces, they were just sort of weird.  The price of all three pieces was $40. 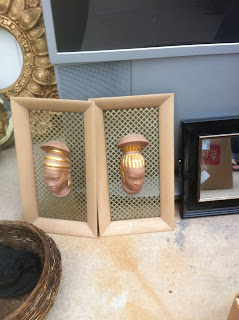 This pair of Egyptian art pieces were very different.  They would make a great accent wall piece.  I'd think about painting the frames to kick their flair up a notch or to be the color you're adding to each room.  I did not see a price on these, but I would just based on the rest of what they had that they would have been about $10 for the set. 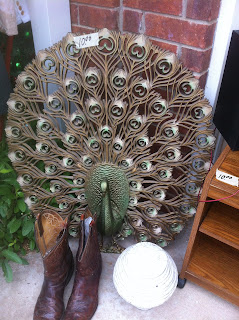 This peacock was just too fun.  A gal had it in her hand and put it in her "pile" as I was arriving.  I just loved it.  A fabulous accent piece for a seating area in a den or family room.  The colors, gold, teal, green, peacock blue were brighter than the photo.  This piece was $10.  It was probably from the 60s.  The leather boots were great as well, in pretty good shape with great stitching up the top. 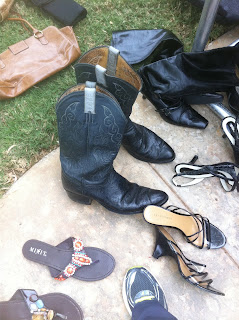 These boots were similar but a little more worn.  The only price I saw on shoes was $4 and these would have been a tremendous buy.  Buying boots that are in good shape for a good price in almost any size is a must.  Everybody wants a pair of cowboy boots. 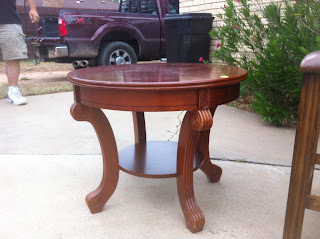 This table looked to me like it had "good bones".  While looking underneath I saw no "designer" name, in fact it said "made in china".  It was very sturdy however, and with just a little cleaning up and polishing it would be nice just as it is.  It's price was $30.  It could also be painted, however, it would cover up the inlaid design that was on top.  I liked the little shelf on the bottom for placement of something special. 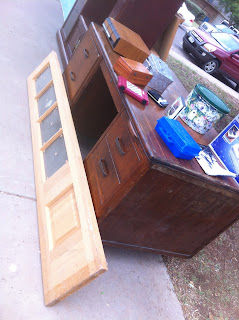 OK, this door was so cool and had it not been so tall, 6'8", I would have taken it home.  The glass was beveled and a price sticker of $35 from Lowe's was on the back but their price was $3!!!  I would have had to put on my creative mind to come up with just the right spot or idea for it.

So I guess I'll start my file/pile of photos and see if this really pans out or is just a whim for today.  I've got other photos of stuff I've bought or liked so I'll add them in too as most of them were found the same way.  I already have two estate sale notices for this week so we'll see if I make time to go.  With this new idea I can go the first day and see and possibly photograph anything I like since I'm not going to buy it.  The first day is always the highest day so I usually don't go.  Maybe I'll change me tactic.  I'll let you know how it goes.

Posted by Robinanne at 6:13 AM

Email ThisBlogThis!Share to TwitterShare to FacebookShare to Pinterest
Labels: Saleing