An Inspiring Story AND a Lesson Learned

"Grit" a positive, non-cognitive trait, based on an individual’s passion for a particular long-term goal or endstate coupled with a powerful motivation to achieve their respective objective. This perseverance of effort promotes the overcoming of obstacles or challenges that lie within a gritty individual’s path to accomplishment and serves as a driving force in achievement realization; "perseverance," "hardiness," "resilience,” “ambition”.

A woman with grit, determination, and a passionate desire, that's how I would describe Lee Ann Rust.   The definition of grit above could not more positively identify her I don't think, including powerful motivation!
Last year at the NFR, I saw the barrel racing rookie of the year, Lee Ann Rust, step forward and accept her belt buckle.  She inspired me.  As I read her story, she seemed like a great person to know.  She's close to my age and when at the time in her life she actually could, and when she had a fabulous horse that might could take her, she set her mind on running barrels at the NFR.  I guess almost every girl who has ever barrel raced has a desire and a dream to run in the National Finals Rodeo!  I know I have had that dream.  As I began to follow her, I realized she was coming to Odessa to run in the rodeo there.  I decided to try to meet her.  I found her on Facebook and we "became" friends.  We had numerous conversations via email.  Lee Ann is a strong believer in "The Secret".  You'll have to read the book but it's about how your thoughts attract your outcome.  Since she was coming to my area, I invited her to sleep over and have a home cooked meal.  I figured she would probably be tired and need a comfortable bed to sleep in and a hot shower.  Unfortunate weather occurred and it snowed in Odessa and Midland.  Staying off the road was the best thing that evening.
I was able however to drive over to see her run the next morning.  The weather was cold, but sunny. 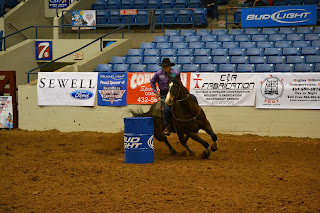 Harley and Lee Ann coming clean around the first barrel in Odessa, Texas 2012.  Unfortunately she hit the second barrel and did not get a time. 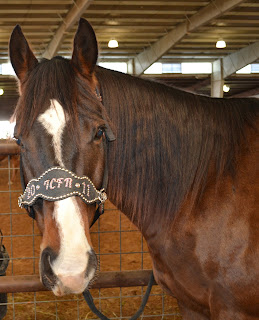 I walked over and met her at her trailer.  We visited and she showed me around.  We then went into the barn and I met Harley.  Here he is modeling the new halter he won at the Texas Circuit Finals just before the end of his first year of competition for the NFR.  Just listening to her talk about her upcoming week and her upcoming year wore me out.  Watching her load all her stuff up, load Harley, manipulate that huge rig around all the other rigs was just this side of crazy.  It is a LOT of work.  You HAVE to be on a mission to work that hard.  And Lee Ann is truly on a mission. 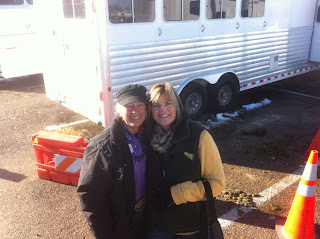 Just as Lee Ann was about to leave, a gal on horseback snapped this photo of us.  Me and Lee Ann, standing outside the barn after her run at the Odessa Rodeo.  She's a great gal I am blessed to have met her.

The lesson for me?  While I would love to hear my name called out in the "Thomas and Mack" arena in Las Vegas, after watching Lee Ann document her travels on Facebook since January, I don't believe I have in me what she has in her.  That's not necessarily a bad thing for me, it's a lesson in how hard those girls work and how deserving those girls are that make it to the Thomas and Mack.  They have ridden many a barrel pattern and traveled thousands of miles across the United States and into Canada to accomplish what they have.  It is not just fun, it is hard work.  It is their job more or less and they have to love it to do it.   I'm impressed, I'm astonished, and I'm amazed.  I'd had a little thought of wishing Lee Ann would have asked me to "ride along" so I could have documented the hard work of a barrel racing rodeo cowgirl, but I'm not sure I could have even done that.  She had many sleepless days and nights getting from one place to the other.  She did a good job of letting her FB fans know how she did and where she was on the road.  Everything you read or hear about her every where she goes states what a great gal she is.  She never meets a stranger.

While I am still prayerful that I have not run in my last barrel racing in competition, I am doubtful it will be at the NFR.  But I am grateful to know someone who will be!

Lee Ann is currently sitting at #12 in the Women's Pro Rodeo Association standings for barrel racing with close to $70K in winnings.  The top 15 barrel racers qualify.  Unless something unforeseeable happens, you and I will be watching my friend Lee Ann compete in the 2012 NFR.

To Lee Ann, who I am priviledged to call friend, my hat is it off to you!  Although I would love to go to Vegas (maybe still maybe) and cheer you on in person, you can be sure I'll be hollering and crying with excitement from my living room in south central Texas as you round every barrel.  I'll be living vicariously through you, each time you come down that famous narrow, long, blind alley at the Thomas and Mack.  On day number 10, as you round that third barrel for the last time, give Harley a little kick for me, as I urge you on.  I'll be prayerful for all clean runs and that you'll be picking up a big check and a saddle, and hopeful you'll soon be headed home for a good rest, a home cooked meal and some green pastures for Harley.

"You are a great champion; when you ran the ground shook; the sky opened and mere mortals parted, parted the way to victory where you'll meet me in the winners circle and I'll put a blanket of flowers on your back." from DREAMER

Encourage One Another, continuing the journey on fresh paths.