The Owl and the Hawk

Birds of prey. I've been warned about those out here in the country in regard to my pup. They are beautiful but not to be trusted. I truly love those big birds, always have. I love to hear them and photograph them. However, at this point, with Ikey in the country with me, I do not trust them, not at all! I keep an ever watchful watch over Ike when he is outside. I've seen hawks flying over several times. I've heard them close more often than that, including the trees behind the house. I caught this one flying south across my yard then resting on the high line one morning last week. You can see he and a smaller hawk next to him. This is a Yellow Tailed Hawk. 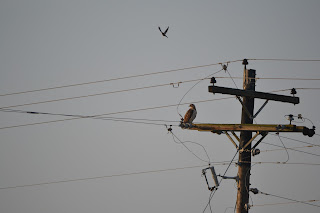 While watching and photographing him, I caught him flying back north, again right outside my yard. 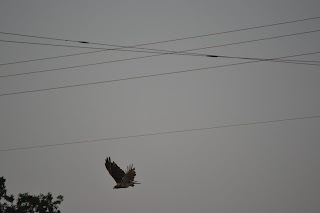 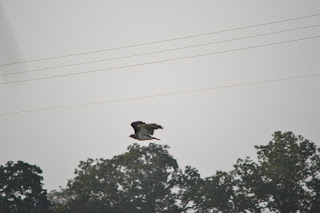 Here is a close up of one.  Aren't they beautiful??

For two nights in a row when I take Ikey outside before we go to bed, I've heard an owl in the trees just outside the fence. At least he's “hooting” to give me a warning that he's close. I don't know why they hoot, but I'm glad he does. I don't let Ikey more than three feet from me. I carry a flashlight. Last night I had a bag with me to put in my car and kept it with me until I picked Ikey back up. That owl makes me nervous. It's dark. He sees with microscopic eyes in the dark. He's fast. He makes no sound as he approaches. Though beautiful he can be deadly for small animals. I'll be reading up on him too!
I don't have any photos of the owls but if I did they might look like this...

This is a great horned owl!

Or this, which is a barn owl.  In fact one late evening one of these almost flew into the window of my friend's Jeep.  It was so close it brushed the rear view mirror...phew!

In the meantime, I will remain close and watchful over my little Ikey!

Encourage One Another....continuing the journey on fresh paths.
Posted by Robinanne at 2:05 PM