There is something about treasure hunting through zillions of booths, and tons of stuff that thrills me.  Just looking for that one thing I love is fun to me.  It's not really something I grew up doing and no one else in my family really enjoys it.  Guess I'm a bit of an anomaly in my family.  However, there are tons of folks who love this past time!

This week was a bit like Antique Roadshow.  On my first day at Warrenton we went into the "fields" to look for bargains.  The things we found in the more populated areas seemed to be more expensive.  It was getting close to six and most places start shutting down about then.  I had an idea that I had seen on Pinterest that I wanted to try to duplicate over my mantel. 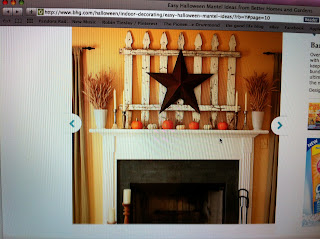 Finding the items to make it was on my list of "keep your eyes open fors" at Warrenton.  We had about an hour in the "fields" to search for things.

First I found the pickets, 18 of them, painted, shabby, white, perfect, for a steal (in my opinion) $15.  I explained to the sellers about my idea and that I was also looking for a metal star.  A really friendly gal at that booth took me around the corner where a guy was selling some stars.  We found a couple, but I decided to take the pickets home that night first to check it out and sure they were the right size before purchasing the star. 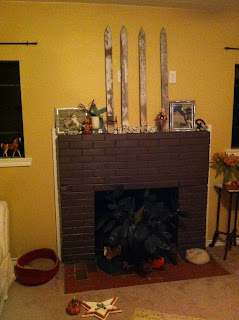 Here is the start of my version.  Looks like they would fit.

So next day at Warrenton, I went back and bought the star first thing. 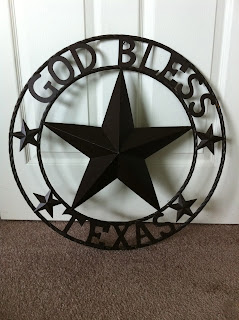 I'll have to do a little work to put it all together but I think it will be great.  I also thought that if I decided not to use it above the fireplace, it would look great at the entrance gate to my house.  So regardless, it was a good buy.

The guys selling at this booth were really friendly.  One of them makes fabulous wood pieces for mantels.  I hope to visit him about that in the near future as his shop is only about 50 miles away.  While at this same booth they had several tables of just "stuff" lined up.  I picked up a couple of other things, a cool tin thermometer with a horse on it and two very neat ceramic pumpkins. 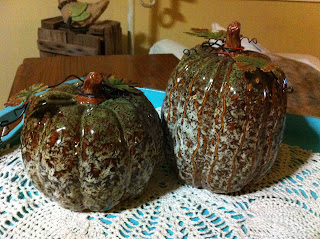 I also spotted this horse. 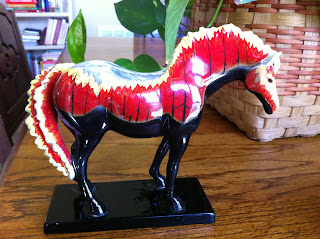 I have seen these Painted Ponies at places like Dillards and Macy's but never really looked at them.  I actually like older horses to collect better, however, the pony was $10 so I figured how could I go wrong?  I didn't really look at him closely until I got home.  He was very pretty with brilliant color and had very intricate details.  The The black lines going up his sides are actually charred pine trees that have been burned and have no foliage.  So I googled Trail of Painted Ponies "Wildfire" (it's title) and discovered that this pony is valuable.  "Wildfire' was the first of this line to be retired, thus making him very special.  He is actually worth about $150 (with the original box and tag it's worth about $350).  I'd say a pretty good "Roadshow" find.  I'm thrilled.  While I have no intention of selling this pony, it's cool to know it's special in it's own way.  Being "retired" is a GOOD thing!  This was an unexpected treasure no doubt.

Here are a some of the other horses I picked up. 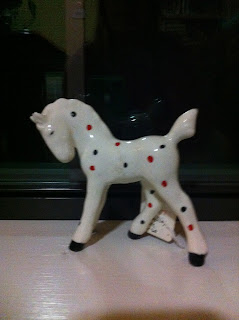 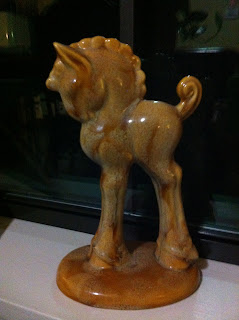 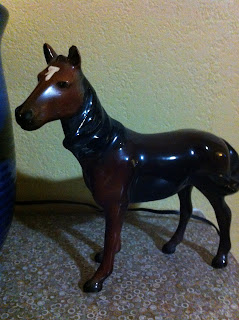 Day two brought about a lot of horses of another color as you can see.  Usually I just look for one special one, but they were just every where on Day Two.  What's a horse lovin' girl to do?

Horses are like people I guess, all different kinds, all different colors, different personalities.  God made us that way.  Each of us is a treasure to Him.  And He blesses each one of us.  Look for your blessings today!

I've got one other really good Antique Days story to tell, so stay tuned till then...

Encourage one another, Continuing the journey on fresh paths.