It happened again.  One of those chance meetings with someone you feel this deep connection to and you can't really explain it.  Here's the story.
As we, Janie and I, are finishing up our last day, trying to get the last of the best under our belt, we headed off to look at something Janie thought I would like.  As it turned out, that was a false alarm.  However, the booth next to that one just drew me in.  They had creatively decorated their booth and had these adorable succulents in tea cups that drew me in.  Every where I looked something caught my eye.  We started chatting with these three gals who were the venders and they, all three of them were just delightful.  Two of them were sisters, identical twins to be exact!  We found that they were from Canton.  When asked if I'd been to Canton, "oh yea" was my reply.  "Have you been down on the square" they asked?  "Well, no" I said and they proceeded to tell us of all the very cute and cool shops on the square in Canton.  They told about several of those, two of which were theirs.  I can hardly wait to go back to Canton!
The Picket Fence  131 W Dallas St, Canton  (Carrie)
Whimsical Gardens of Canton   (Lanette and Yevette)

During our conversation I eyed these sweet crosses made from old silverware.  They were all very different.  Several had tatting handcrafted by the designers of the crosses.  I had to have that one.  Well, I had to have two!  They showed me around the booth where all these crosses  were hanging and as it turns out, I ended up with six! 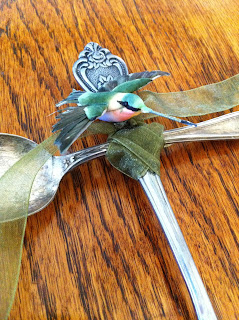 (I'm only going to show you a peak at my crosses because I don't know where these might end up!  You know Christmas is just around the corner.  This one has a hummingbird on it...you know how I love those.  So this one I'll probably keep.) 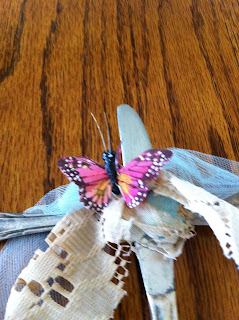 (Guess who this one might be for?)  I love things that are "upcycled" or made for one intention and crafted into something else.  These were a great example of that.

Every time I turned around there in this little shop there was some fabulous other handmade thing that made me swoon!  I kept putting things on their counter saying "I'll take this too".  About 13 items later I made my final purchase.  This shop was truly a fabulous find.

During my shopping we starting sharing things about ourselves.  We had so many commonalities it was uncanny.  Horses, one twin raised cutting horses.  So we had to have a conversation about my horses too.  One twin's last name started with T, as does mine. Interesting.

The most curious thing however, was when I found a sweet little vase with lace and a butterfly on it.  Had to have that too.  I explained how my mom loved butterflies and every time I saw one I thought of her.  Both the sisters looked at each other and sort of turned their heads in that "hum" kind of way and said "us too".  It was then that I knew this stop was a God thing.  He just doesn't do things by accident.  He obviously had some reason for me to walk in this little fabulous booth of women.  We talked a few minutes about our mothers.  Everybody got a little teary.  I have never met anyone who thinks about their mother when they see a butterfly like my sister and I do.  Butterflies are just dear to us....and to my new friends.

1 John 4:7
Dear friends, let us love one another, for love comes from God. Everyone who loves has been born of God and knows God.

We then shared phone numbers, email addresses and cards and all hugged as we were leaving, like old friends do.  It was just a special meeting of women among thousands of people in the fields between Roundtop and Warrenton.  It was a delightful way to end a great day!

I don't know that this is the end of my "chance" meeting with these new friends.  I believe God has something else in mind.  I believe the connection was made for some reason.  Who knows when we might find out what that is.  In the meantime, I'll just enjoy the story and will certainly share it with my sister.

Romans 12:1
Therefore, I urge you, brothers and sisters, in view of God’s mercy, to offer your bodies as a living sacrifice, holy and pleasing to God—this is your true and proper worship.

Encourage one another, continuing the journey on fresh paths.

Blessings and love...
Posted by Robinanne at 5:56 PM